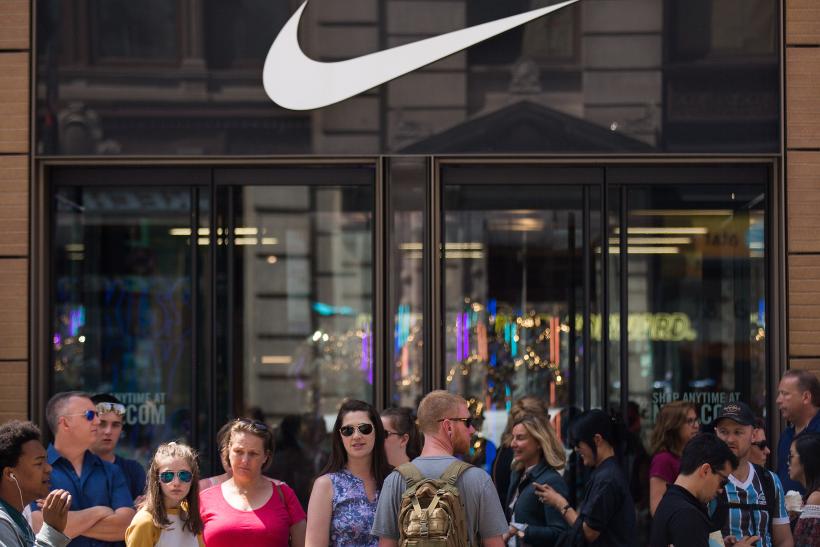 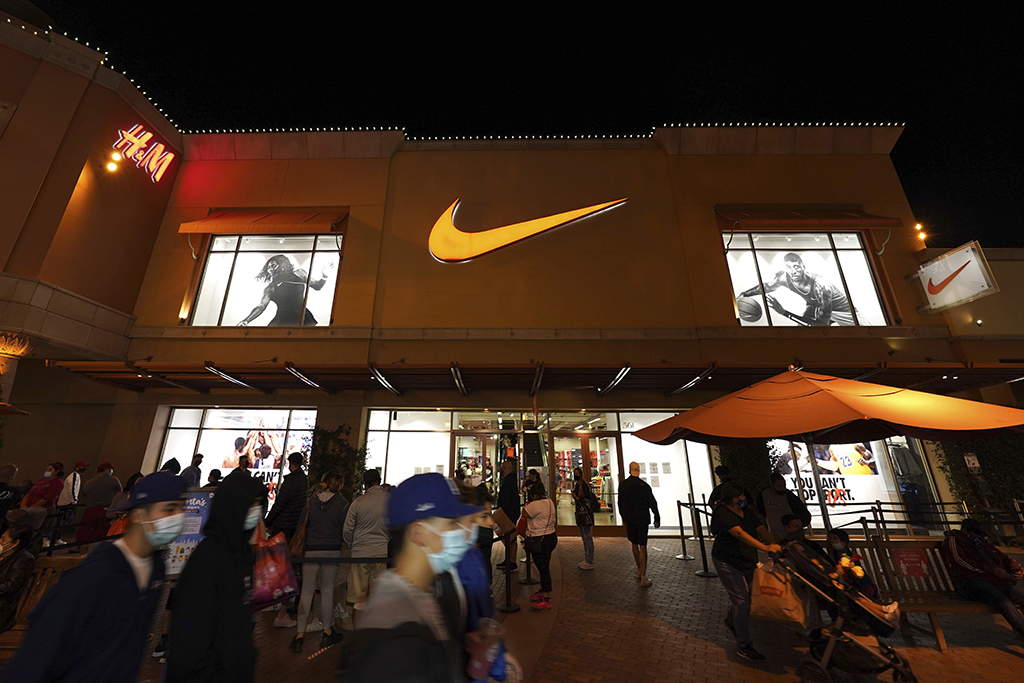 19-year-old Joe Hebert’s business has been booming. The sneaker reseller’s online store, West Coast Streetwear, has over 60, 000 followers on Instagram, and Hebert, also known as West Coast Joe, regularly makes six figures in a single month by selling on Nike’s SNKRS app. There’s only one problem: his side hustle cost his mother her job as an executive at Nike.
Ann Hebert, who served as a VP overseeing Nike’s North America business, resigned Monday after a Bloomberg profile of her son made it apparent he had been using her credit card to run West Coast Streetwear. Ann, who had been with Nike for over 25 years, allegedly didn’t violate company policy and even told Nike about her son’s business, the company said. The fiasco made waves in the sneaker community, but sneakerheads see it as the latest in a series of issues relating to the way Nike handles reselling.
Nike’s SNKRS app ratings, for example, are mixed. While most users have left five star reviews, a quick glance at the app’s most recent reviews yields plenty of one star ratings. Many of those ratings complain about bots on the app, the inability to bid on sneakers that sell out instantly, and app glitches.
“The convenience of the app is great, but you probably have a better chance of winning the lottery than getting a pair of well sought out sneakers, ” one user wrote. “It’s amount of bots that use this is insane! ”
“Unless you have a bot to complete a transaction in less than a millisecond, don’t even waste your time, ” another wrote.
Despite the negative reviews, app store ratings are going up.
The SNKRS app currently has a 4. 8 rating with 608, 000 reviews, a steady increase from the 423, 000 reviews it had last April, according to our data. The pandemic has been good for sneaker resellers. Joe Hebert told Bloomberg that his profits tripled when the stimulus checks landed in bank accounts. And Hebert is one of the reasons sneakerheads are so dissatisfied with the app.
For starters, Hebert’s business model involves gaming Nike’s system using bots and a group of fellow resellers who coordinate their efforts on Discord — common practices among the most successful resellers. Bots are used to target the hottest sneakers on the SNKRS app and buy them in high quantities, only to sell them for higher prices. When reseller groups buy hundreds of sought-after shoes in one go, the average consumer — presumably Nike’s target audience — misses out.
However, Hebert isn’t engaging in illegal activity. Nike intentionally makes it hard to buy some of its shoes, creating an engineered scarcity model first made famous by brands like Supreme. When a new shoe drops, the hype is fueled by the winners and losers on social media — those who secured a pair flaunt them. The ones who complain weren’t fast enough. And many of Nike’s drops are exclusive to SNKRS, further fueling the hype.
Many sneakerheads called out Hebert online, speculating that his mother’s ties with the company — which included overseeing the SNKRS app — helped him get a hold of exclusive products or information about upcoming drops. While there’s no evidence that Hebert received insider information, he’s already at a considerable advantage. With the use of bots, a network of resellers, and even a Eugene, Oregon warehouse, West Coast Joe isn’t likely to stop selling anytime soon.
About the Data:
Thinknum tracks companies using the information they post online, jobs, social and web traffic, product sales, and app ratings, and creates data sets that measure factors like hiring, revenue, and foot traffic. Data sets may not be fully comprehensive (they only account for what is available on the web), but they can be used to gauge performance factors like staffing and sales.
Ad placeholder 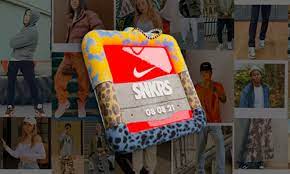 The Best Way to Bring Nike SNKRS to Your Doorstep | Stackry

Here at Stackry, our mission is to give you access to the best fashion and clothing accessories, regardless of your location. If you live outside of the USA, it can be difficult to buy Nike’s newest and most sought after sneakers. These shoes are a great addition to anyone’s wardrobe, so they often sell out fast! Without having a plan to secure your place in line, you’ll have a hard time scoring the latest sneakers from Nike—as the nicest sneakers are sometimes bought up within minutes!
To help you get your hands on the most popular shoes Nike has to offer, we’ve put together this guide. You’ll learn the secrets to scoring the latest and greatest additions to Nike’s lineup using their SNKRS app. Read on to learn how to bring your SNKRS game to the next level!
U. S. shoppers are able to use the SNKRS app to reserve their place in line when seeking out Nike’s latest batch of limited-edition sneakers. From time to time, users may even be given the option of buying the sneakers immediately! However, the app isn’t foolproof, and sometimes the most popular items can still slip through your fingers. Nonetheless, Nike’s SNKRS app is your best option if you’re looking to score the latest styles.
The first step in securing your pair of limited edition Nike sneakers is to install the SNKRS app onto your phone.
For Android users, the process of installing the SNKRS app on your device is fairly quick and easy. Follow this link and simply download the APK. After the download has finished, continue on to your Download of Files folder and install the app by opening the file. After the install has finished, you can open up the SNKRS application and create your account.
For iPhone users, the process isn’t quite as simple. To make it easier for you to get the SNKRS app installed on your iOS device, follow the instructions in this video.
After you’ve successfully installed the SNKRS app onto your Android or iOS device, you’re still left with the problem of SNKRS not shipping outside of the United States. Fortunately for you, we’ve detailed what steps you can take to get your hands on Nike’s limited edition offerings, regardless of your location:
In order to get your newly-purchased Nike sneakers to your door, you’ll need to take advantage of a reshipping service such as Stackry. These reshipping services allow you to buy a product from a U. vendor, and then have it shipped to a secure U. -based address before forwarding it to you.
At Stackry, we take pride in being your first choice for reshipping your new Nike sneakers. Our services are highly affordable, and we guarantee that whatever you buy will make it to your doorstep safe and sound!
To get started with us, navigate to our website and create your account. After your hassle-free account is created, it’s time to move on to your dashboard: There, you’ll find the address to our warehouse, where you’ll have your very own locker to store all your purchases. Copy down the provided address, and then set it as your primary shipping address within the SNKRS app.
Congratulations, you’re now ready to begin shopping with Nike’s SNKRS app! You’ll have instant access to the latest and greatest limited releases Nike offers, which usually only make it into the hands of U. customers.
How It Works
If you’re looking to get your hands on a pair of brand-new Nikes without waiting for the SNKRS app to restock, we’ve highlighted a few great options! There are plenty of new and classic designs on eBay and other sites—and these are far less likely to go out of stock than the items on the SNKRS app. Whether you’re looking to keep up with the most popular fashions or want a more basic sneaker, there are plenty of exciting choices.
AIR JORDAN VI NRG – $300
Michael Jordan earned his spot as the top player in the NBA back in 1991 while wearing a pair of Air Jordan VI’s. At this time, he won his fifth scoring title, became second league MVP, and tackled the first of six championships that he would go on to win. If you’re looking to honor his legacy while sporting some of the nicest looking shoes on the market, consider the Nike Air Jordan VI NRG. It’s not the cheapest sneaker around, but at $300 from Ebay, it’s sure to turn heads wherever you go.
WOMEN’S AIR MAX 720 – $125
For years, Nike has been at the forefront of footwear technology and has been a real innovator in the market. Nike Air cushioning has seen many updates over the years and continues to push the boundaries of comfort. The Nike Women’s Air Max 720 offers you a visible Air unit that is 6mm taller than previous iterations, making it a comfortable and stylish option. At only $125 from eBay, this shoe is an excellent choice.
WOMEN’S AIR FORCE 1 – $110
You can’t go wrong with the aircraft-inspired Women’s Air Force 1 sneaker! This sneaker became an instant icon on the courts following its 1982 release. As time went on, the Air Force 1 became a mainstay in streetwear and hip-hop culture. The Air Force 1 acts as a perfect backdrop for a variety of color schemes and patterns, so you’ll find this shoe in many eye-catching varieties. Ebay currently has the Air Force 1 priced at $110 in an understated Off White color, which is sure to perk up your wardrobe!
After reading through this guide, you should be well on your way to getting your hands on some of the greatest limited releases Nike has to offer. Using Nike’s SNKRS app, you’ll find it much easier to score some of the most fashionable sneakers on the market. And by using Stackry as your reshipping option, you’re guaranteed to get your new sneakers shipped to your door safe and sound!

The SNKRS app currently has a 4.8 rating with 608,000 reviews, a steady increase from the 423,000 reviews it had last April, according to our data. The pandemic has been good for sneaker resellers.Mar 3, 2021

How does the SNKR app work?

We use drawings through the SNKRS App and website to give you a chance to reserve some of our most in-demand, limited-edition shoes. … When a drawing goes live, @nikestore will tweet a link to the shoes on Nike SNKRS. The SNKRS App will also send a mobile notification to Members who opted to be notified.

How do I install SNKRS app?

For Android users, the process of installing the SNKRS app on your device is fairly quick and easy. Follow this link and simply download the APK. After the download has finished, continue on to your Download of Files folder and install the app by opening the file.