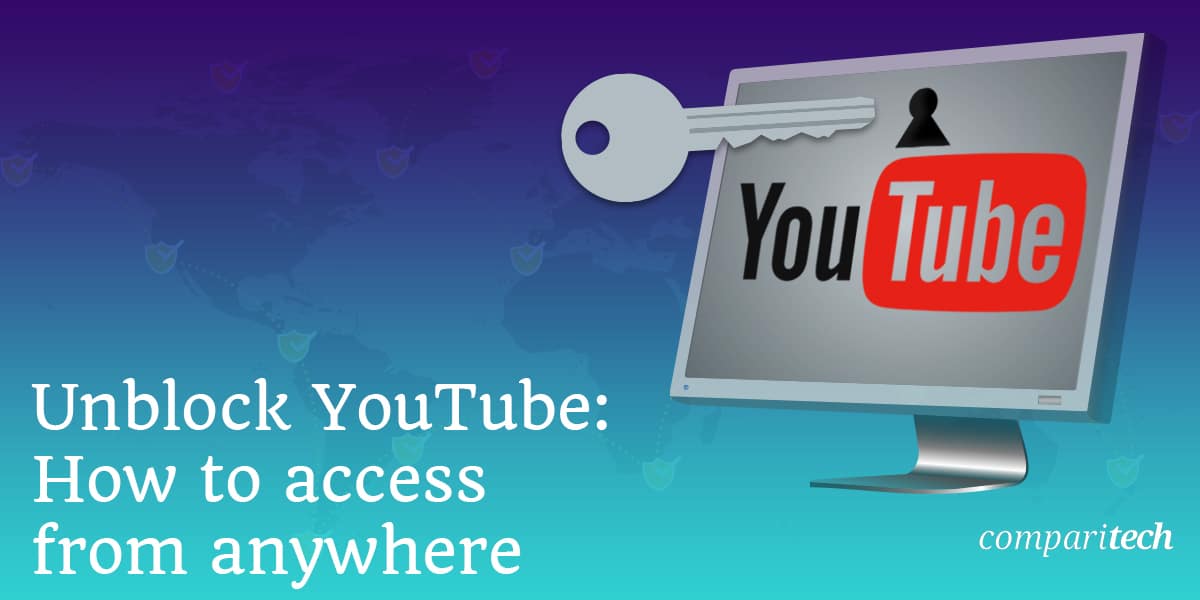 How to watch blocked YouTube videos from other countries

Bypass YouTube’s filter to watch blocked videos and get around the ‘The uploader has not made this video available in your country’ message
We explain how you can stream YouTube videos that aren’t available in your country or region
By
| 03 Aug 2021
Every now and then you’ll try to watch a music video, trailer, or gameplay clip on YouTube only to see a very annoying message: ‘The uploader has not made this video available in your country’.
It’s a common mistake to assume that all YouTube videos are available everywhere in the world, but it doesn’t quite work like that. YouTube isn’t only populated with user-created content – it also hosts licensed content including movies and TV shows, and some of these are only licensed for specific countries.
That means that sometimes you won’t be able to watch a video at all in your country. Other times, but just as irritatingly, you might have to pay to buy or rent a video that’s free to watch elsewhere in the world.
Luckily, there are ways to bypass YouTube’s regional filter and watch videos that are blocked in your country. Here’s how to do it.
Watch region-blocked YouTube videos with a VPN
The most reliable way to get around the region filter is simply to use a VPN. This is a service which lets you browse the web as if you were in a different country. You can try this with a free VPN, though we recommend a paid service such as NordVPN which currently sits at the top of our best VPN ranking.
A paid-for VPN like Nord offers fast connection speeds, more server options than a free one and doesn’t place limits on how much data you can stream via the service.
Simply install the app from your VPN provider of choice on the device where you’re watching YouTube. There are typically apps for PC, Mac, Android and iPhone/iPad as well as Android TVs, and streaming gadgets such as the Amazon Fire TV Stick.
Sign up to your chosen VPN service (it’s easier to do this on a laptop than your TV) and – obviously – make sure you choose one that has servers in the country you want to pretend to be in.
Then launch the VPN app, log in with the details you entered during the signup process and look through the location / country list and pick a server that’s in the correct region to access the video in question. That’s normally the location of the video’s creator or uploader. You might have to try a couple if you’re not sure.
Then all you have to do is head back to the YouTube app – or the website in a web browser – and go back to the video you want to watch. YouTube should now think that you’re located in the right region and play the video.
This is usually the quickest and easiest way to get past the region block on YouTube videos, especially if it’s a problem you run into repeatedly. But, there are other options…
Use a proxy to unblock YouTube
If you don’t want to use a VPN, the next best thing is a proxy server. This has a similar effect to a VPN – allowing you to browse as if in a different country – but is less secure and doesn’t encrypt your traffic, which is why we normally recommend a VPN over a proxy.
If you just want to watch music videos on YouTube, encryption and security might not be your biggest concerns, but if you’re trying to access YouTube from a country with a repressive government that bans certain videos, a VPN is definitely the better option.
As with VPNs, there are free proxy servers around, but they’re often so limited that a paid service is worth it, especially if you can find one with a free trial. You’ll typically have to access the server through a web browser extension, and once again make sure to select a server located in a country you think will have access to the video in question. Then load up YouTube and start watching.
Download the YouTube video
If all else fails, you might be able to download the YouTube video and thus get around the region-blocking entirely. We have an entire article dedicated to how to download YouTube videos to your phone, PC, tablet, or anything else, so we won’t run through the specifics here.
Do bear in mind that while it isn’t illegal to download videos from YouTube, it is technically against Google’s terms of service, and is arguably immoral since you’re circumventing the adverts that help fund the site and – more importantly – the content creators.
Related articles for further reading
What is a VPN and why you need one
How to use a VPN
Best VPN for streaming
Best VPN for YouTube
Best VPN deals
Author: Dominic Preston, Deputy Editor
Dom covers everything that runs on electricity, from phones and laptops to wearables, audio, gaming, smart home, and streaming – plus he’s a regular fixture on the Tech Advisor YouTube channel.

How to Create YouTube Traffic With Proxies – Small Business – Chron.com

The higher the view count of your YouTube video, the more likely other people are to find it and watch it themselves. If your video is related to your business endeavors, increasing your view count becomes a business necessity. One way to increase the view count enough to attract other people’s attention is to view it multiple times yourself. YouTube is set up to ignore multiple views from your own browser, but you can still increase the count yourself by using Web proxies. Web Proxies In order to exchange data, computers on the Web need to identify themselves to each other. This identification includes a computer’s unique Internet Protocol address, the operating system it uses, the browser it is using and more. YouTube uses this information to identify your computer, so that it can ignore multiple views from it. A Web proxy is a website that acts as an intermediary between your computer and any other site. It sends its own identification information to that site instead of your computer’s, making it look as though a different computer is exchanging data or accessing information. This allows you to increase the view count for your YouTube video by tricking it into thinking that many different people are looking at it. Proxy Hubs In order to increase your view count as much as possible, you are going to need to use a lot of different proxies, as YouTube will only count one view from each IP address. Find a proxy hub site, such as (see Resources), in order to have access to as many different proxies as possible. Using Proxies Go to your YouTube account. Click on the Videos button. On your videos page, select the video that you wish to have a higher count. Copy the URL of this video. Go to the proxy hub. Select the first proxy site on the list. Paste your video’s URL into the main field on the page, then click on the “Enter” button. The proxy will then load your YouTube video, incrementing its view count. Repeat this procedure, using a different proxy each time. Watching the Video YouTube increments its view counter when you start viewing the video. There is no need to watch the entire video every time you use a different proxy in order to increase your view count. References Resources Writer Bio Clare Edwards has been providing Internet content since 1998. She has written and translated for a variety of markets: everything from technical articles to short fiction and essays on alternative spirituality. She holds a certificate of higher education in electronics and audio arts from Middlesex University.

1. Use a VPN to Access YouTube When It’s Blocked. Using a VPN, or virtual private network, is the easiest and most secure way to unblock YouTube. VPNs are a great option for online security, anonymity, and unblocking content that has been restricted by firewalls, censorship, or geoblocking technology.

Use a proxy to unblock YouTube If you don’t want to use a VPN, the next best thing is a proxy server. This has a similar effect to a VPN – allowing you to browse as if in a different country – but is less secure and doesn’t encrypt your traffic, which is why we normally recommend a VPN over a proxy.Aug 3, 2021

Go to the proxy hub. Select the first proxy site on the list. Paste your video’s URL into the main field on the page, then click on the “Enter” button. The proxy will then load your YouTube video, incrementing its view count.